Parents of Children with IBD 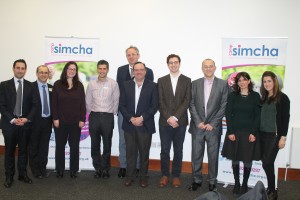 A symposium on Understanding Crohn’s and Colitis In Children and Adolescents  at Kinloss Gardens, Finchley attracted an audience of around 70 people keen to find out more about the management of IBD (Inflammatory Bowel Disease) and the therapies necessary to keep it under control. The fact that this was an evening devoted to Crohn’s and Colitis in children and young people sparked particular interest. Some people travelled from as far away as Manchester and Gateshead for the chance to hear about these chronic conditions from a group of experts, including paediatric gastroenterologists, a colorectal surgeon, a dietitian and two researchers, all celebrated for their work in this particular field.

Dr Stephen Mann, Consultant Gastroenterologist at Barnet Hospital, acted as the panel moderator and fielded questions, which could be posed anonymously, from the audience.

Paediatric Gastroenterologist at the Royal Free Hospital, Dr Mark Furman described the range of investigative tools available to help doctors decide on a diagnosis. Non-invasive diagnostics and the need to avoid radiation wherever possible in children has led to the increasing use of ultrasound and MRI, and in the last ten years, an innovative diagnostic tool, the video capsule endoscopy invented by Israeli scientists which involves a small capsule that contains a transmitter to convey images as it travels down the gastrointestinal tract. 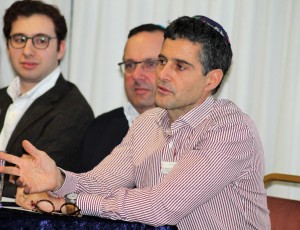 Dr Warren Hyer, Paediatric Gastroenterologist at Chelsea and Westminster Hospital and at St Marks Hospital, Harrow outlined changes in methods of treating IBD in children and adolescents. “Our priority has changed. Today our greatest concern is to keep the disease “quiet” since the more successful we are in this, the less likely it becomes that complications will ensue. Living with a lifelong disease such as IBD and keeping it under control is a long game.  To this end, we focus on closer monitoring including better endoscopy. We are more practised in managing medical intervention with immunosuppressants for example because we know more about them and how to tweak them, we put in more surveillance and use them more effectively. So we know how to use old drugs better.”

The newer biologic drugs like Infliximab  might be “stonkingly expensive” but these medications enable practitioners to get on top of the disease at an earlier stage. “There is a great deal of energy in the academic world devoted to trying to fix Crohn’s and Colitis. More new treatments are likely to be coming on line over the next few years.”

Then there is the question of diet and environment and how they might impact on IBD. Why are there more sufferers from IBD now than there were 30 years ago?  The relationship between diet and Crohn’s and Colitis is a recurrent question. Although these conditions are not caused by diet, they might well be impacted by the introduction of different gut flora. Dr Hyer indicated that, counter intuitively, 21st century standards of hygiene bear some responsibility for the increasing incidence of IBD.  The genetic element in these diseases is intensified by our need to marry one another while “a posh environment” adds yet another layer of risk.

This was confirmed by Dr Adam Levine, Honorary Research Associate and Academic Foundation Doctor at University College Hospital who with Research Co-ordinator  Dr Elena Schiff has been conducting a long term research project into the DNA of Jewish patients to help understand why they are more susceptible to Crohn’s and Colitis than the general population.

Dietitian Abi Freedman spoke about the anxiety experienced by parents of children with these illnesses about the effect of diet on their condition. Clearly a diet rich in fruit and vegetables is preferable to one full of fats and sugar but this holds true for the whole population. While adapting your diet does not prevent IBD, a healthy, balanced diet can be of benefit.

Mr Daren Francis, Consultant Colorectal Surgeon at Barnet Hospital, said that in the case of colitis, surgery can help.  In the case of Crohn’s, surgery is often only performed when medical treatments have been unable to control the disease.  Surgeons carry out the minimum amount of surgery necessary to improve the patient’s quality of life.

Neville Goldschneider, Chief Executive of Camp Simcha which organised the function   together with Crohn’s and Colitis charity Jewish Digest, said Camp Simcha has the tools to offer children with serious medical conditions a range of services that can make a positive difference to their quality of life.