This information has been provided with kind permission from Crohn’s and Colitis UK - a nationwide charity committed to providing information and support, funding crucial research and working to improve healthcare services for anyone affected by Inflammatory Bowel Disease.

What is Crohn’s Disease? 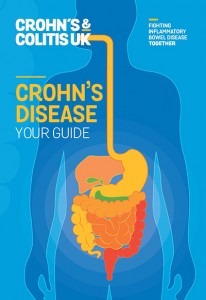 Crohn’s Disease is a condition that causes inflammation of the digestive system (also known as the gastrointestinal tract or gut).

Crohn’s is one of the two main forms of Inflammatory Bowel Disease, so may also be called “IBD.”  The other main form of IBD is Ulcerative Colitis.

Crohn’s is sometimes described as a chronic condition. This means that it is ongoing and life-long, although you may have long periods of good health (remission), as well as times when your symptoms are more active (relapses or flare-ups).

At present there is no cure for Crohn’s, but drugs and sometimes surgery can give long periods of relief from symptoms.

Although considerable progress has been made in IBD research, researchers do not yet know what causes this disease. Studies indicate Crohn’s is caused by a combination of factors: the genes the person has inherited, an abnormal reaction of the immune system, and something in the environment.

How does Crohn’s affect the gut?

The gut (digestive system) is like a long tube that starts at the mouth and ends at the anus. When we eat, the food goes down the oesophagus into the stomach, where gastric (digestive) juices break it down to a porridge-like consistency. The partly-digested food then moves into the small intestine (small bowel). Here it is broken down even further so that the nutrients can be absorbed into the bloodstream through the wall of the intestine. The waste products from this process – liquid and undigested parts of food – are then pushed into the colon (large intestine/large bowel). The colon absorbs the liquid, and the left over waste forms solid faeces (stools). These collect in the last part of the colon and the rectum until they are passed out of the body in a bowel movement.

Crohn’s causes ulceration and inflammation that affects the body’s ability to digest food, absorb nutrients and eliminate waste in a healthy way.

Crohn’s can affect any part of the gut, but is most likely to develop in the ileum (the last part of the small intestine) or the colon.  The areas of inflammation are often patchy, with sections of normal gut in between. A patch of inflammation may be small, only a few centimetres, or extend quite a distance along part of the gut.  As well as affecting the lining of the bowel, Crohn’s may also go deeper into the bowel wall.

What are the main symptoms?

Crohn’s symptoms may range from mild to severe and will vary from person to person. They may also change over time, with periods of good health when you have few or no symptoms (remission), alternating with times when your symptoms are more active (flare-ups). It is a very individual condition – some people can remain well for a long time, even for many years, while others have frequent flare-ups. Symptoms may vary depending on where in your gut you have Crohn’s, but the most common symptoms during a flare-up are:

see Tests and Investigations for information on how Crohn’s is diagnosed.

see Medication used in IBD for information on what drugs are used in Crohn’s Disease.

This information has been provided with kind permission from Crohn’s and Colitis UK – a nationwide charity committed to providing information and support, funding crucial research and working to improve healthcare service for anyone affected by  Inflammatory Bowel Disease.

Visit www.crohnsandcolitis.org.uk for more information and a full list of their information sheets, booklets and guides.

To  donate to Crohn’s and Colitis UK and support their vital work, click here: http://www.crohnsandcolitis.org.uk/get-involved/donations/ways-to-donate