Can a change in diet help Crohn’s disease?

Most people with Crohn’s disease ask their doctor whether changing their diet can help control their disease. They tend to get conflicting advice. Many doctors say that diet makes no difference but some doctors, particularly those looking after children, will recommend dietary interventions.

My first degree was in nutrition and I have always taken a special interest in diet and its’ relation to disease. We now know that the bacteria in the gut may be directly relevant to the development and sustaining of active Crohn’s disease. Professor Segal at University College London has demonstrated a primary abnormality in the innate immune system which prevents the body from completely destroying bacteria that manage to get through the bowel wall. This leads to a chronic inflammation which we recognise as Crohn’s disease.

It is not difficult to envisage that reducing or changing the bowel composition inside the gut may have an effect on disease activity. Professor John Hunter from Cambridge spent many years investigating this link and demonstrated an approach to diet, which I have seen works in many patients.

I have seen patients who have followed this approach and managed to avoid powerful medication which they otherwise would have needed to take. I have also seen some people avoid surgery although if there is significant stricturing or fistulae, surgery may often be the best way forward.

Can diet be used alone as therapy in Crohn’s disease?

The answer of course is yes for some and no for others. Diet does not work for everyone. Many people with Crohn’s disease require drugs to control their condition and prevent it progressing. Indeed early aggressive control disease can prevent long-term problems. Diet may or may not be appropriate as the only therapy, but is often extremely useful as an adjunct to other treatments and minimises the need for evermore powerful drugs.

Does diet work for everybody?

There are certain people for whom diet is very unlikely to work. It tends to work well in small bowel disease. If the disease affects the large bowel (colon), diet is less successful and if the patient has rectal disease only, diet tends not work at all. For these people, the triggering factors are much less likely to be bacteria and more likely to be other contents of the stool.

Does diet work in ulcerative colitis?

Unfortunately this approach to diet does not make any difference in ulcerative colitis. It is very important to continue a well-balanced diet. Approximately one in 10 people find that milk products containing lactose make their colitis worse. The majority of people however do not notice any difference when changing their diet, although some people have claimed benefits from a diet known as ‘Breaking the Vicious Cycle’. There are however, no hard scientific data to support the use of this diet at present.

Perhaps the most difficult aspect of dietary control in Crohn’s disease is the need to be careful about food intake over a long period of time. In particular people worry about not being able to eat normally on Shabbat. This is indeed an issue but there are certainly ways around it. Some people have enough self-motivation to manage their diet very successfully. Most require the support of a specialist dietician. Some decide that they would rather not try this approach at all. But given the potential benefits, it seems very worthwhile to at least give it a try. 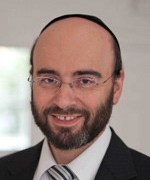 Professor Lovat was a scholar at the City of London School. He qualified from University College Hospital Medical School having also gained a first class honours degree in nutrition. He received a prestigious MRC research fellowship to fund his PhD studies at the Royal Postgraduate Medical School. He then trained in advanced therapeutic endoscopy at University College London Hospitals and was appointed a Consultant Gastroenterologist & Senior Lecturer in 1999. He was appointed as the first Head of the newly established Research Department for Tissue and Energy at UCL and was awarded his professorship in 2014 based on the quality of his research into complications of acid reflux disease and minimally invasive treatment to prevent and treat oesophageal cancer.

Professor Lovat sees patients at University College London Hospitals NHS Foundation Trust and is the director of the London Gastroenterology Centre with clinics on Upper Wimpole Street and The Wellington Diagnostics and Outpatients Centre in Golders Green.