Probiotics – so far so good!

As you might know, I’ve been experimenting with different diets as my colitis has been flaring up again and I’m desperately trying to get it under control.

Since I get regular flare ups even with all the medication I take, I’m always looking for new alternatives to help manage my colitis. Over the past 20 years I’ve tried everything from acupuncture to hypnotherapy, the Specific Carbohydrate Diet to reflexology, without any success.  I would literally try anything. The frustrating thing is there isn’t one thing that works for everyone, it’s very individual and you have to find what works for you, which can be tricky.

I hate to admit it but the sugar free/wheat free diet that I’ve been trying has actually made no difference at all to my symptoms.  If anything it made me feel worse as I was substituting with other “healthier” ingredients which were irritating my gut.  I spent hours in the kitchen trying out new recipes with healthy alternatives to wheat and sugar, as I need my bread/cake/biscuits/chocolate fix and even though I did feel hungry a lot of the time, it would be worth the effort if I was going to feel better for it.  (I owe thanks to all my concerned friends and family for worrying that I may wither away and for sending me a constant stream of wheat and sugar free  recipes to keep me going!)

I  got a lot of advice and encouragement from people with IBD who have succeeded in controlling their IBD symptoms with diet.  Some of those I spoke to had been on a special diet for years and had managed to come off their medication.  It was very inspiring  but unfortunately it  wasn’t working for me.

I recently met up with Seb who founded “Ibd Relief,” an excellent resource for IBD sufferers, and he mentioned he had started taking a new, improved probiotic called “Symprove.”   Probiotics are something I’ve tried taking many times over the past few years but never saw any results.

Probiotics are said to benefit various ailments from infection-caused diarrhoea, Inflammatory Bowel Diseases, Irritable Bowel Syndrome, to asthma, allergies and Type 1 diabetes. Probiotics are defined by The World Health Organization as “live microorganisms which when administered in adequate amounts confer a health benefit on the host.”

Scientists have known for decades that probiotics can boost your health. That’s why yogurt “active cultures,” or good bugs, have become so popular.

According to the Cleveland Clinic, “probiotics may help keep you healthy by:

I read up on Symprove to see if it had an edge that the other probiotics on the market don’t have, and it seems that to be effective, bacteria have to  Arrive,  Survive  and  Thrive. 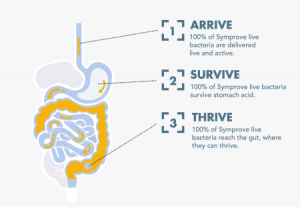 An independent study was carried out by Dr Simon Gaisford of University College London School of Pharmacy on 8 well known probiotics on the market (Actimel, Yakult, Biokult amongst others) to establish whether they safely arrive, survive stomach acids, and thrive in the target area of the gut. Symprove was the only one to meet all three challenges.

For details on the research study go to: https://www.youtube.com/watch?v=VXSpcwF7f78

More recently, an independent study by Darent Valley Hospital and King’s College London, was carried out to establish the effect of Symprove in IBD patients. It found that 76% of patients with ulcerative colitis had significant reductions in faecal levels of calprotectin – a protein released by cells in the intestine when it is inflamed. These findings suggest that Symprove may help patients with ulcerative colitis to remain in clinical remission.

I was desperate to try something else after the diet had failed, but having tried probiotics in the past I wasn’t very enthusiastic, especially when I heard it wasn’t a quick pill you swallow but a drink, which no doubt would taste awful.  But my (inflamed) gut pushed me to try it as the results sounded promising. I ordered the mango flavour and it actually didn’t taste bad at all. It’s one small cupful every morning 10 minutes before you eat breakfast. No big deal.

Within two days I noticed that my symptoms had improved.  Within a week I almost felt back to “normal” again. That was 6 weeks ago and I’m still feeling great and so much more energetic.  It’s important to be active to keep your bones healthy but it’s not easy to exercise if you’re running to the bathroom constantly.  Since starting the Symprove I’ve even managed to get out and do surf yoga which I could never have done a couple of months ago! I’m a pretty sceptical person and nothing else has helped so far, so this really seems to be a winner. 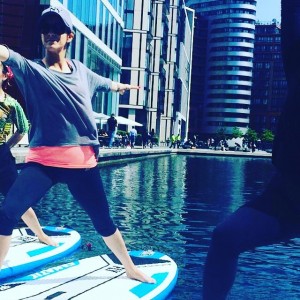 Who knows if it will continue to keep my symptoms at bay but I’ll keep going with it and see…it’s quite expensive at £158 for a 12 week course, which works out at about £13 a week, but  good health is worth a lot more than that!

For more information go to www.symprove.com